An evaluation of the Nicholson-funded New Jersey In-home Asthma Intervention Pilot Project found that Community Health Workers (CHWs) were effective at helping families learn how to control environmental factors in their homes that triggered or exacerbated asthma in children enrolled in the state’s Medicaid program.  Over the course of the intervention, the percentage of children participating in the project whose asthma was assessed as “controlled” nearly doubled—from 26.7% to 44.7%. 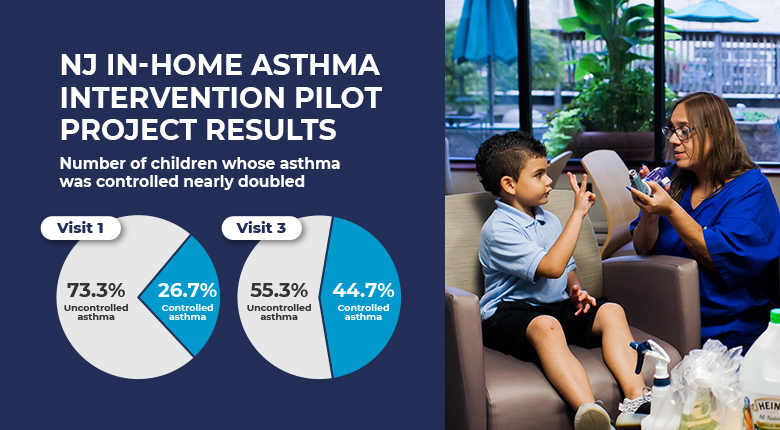 The project was launched in 2017 in partnership with the New Jersey Department of Health. Among the grantees was Boston-based Health Resources in Action (HRiA), which received funds starting in 2016 to provide technical support during the design and implementation phases and later to conduct an evaluation.

Over two years, CHWs made home visits to 174 families who have children enrolled in Medicaid. Home visitors educated parents and caregivers on asthma management skills that resulted in improving the health and well-being of children suffering from poorly controlled asthma, mostly through mitigating environmental conditions in the home known to trigger attacks. Parents and caregivers were educated about potential in-home asthma triggers, including dust, mold, cleaning products, tobacco smoke, and pests.

Assessments of changes in children’s asthma conditions were based on questionnaires CHWs administered to caregivers. CHWs also made observations in homes of participating families to determine whether steps had been taken to mitigate factors that can trigger asthma.

In underwriting this project and the subsequent evaluation, The Nicholson Foundation sought to demonstrate both the effectiveness of home interventions to help control asthma and further expand the role that CHWs can play in improving health outcomes, lowering healthcare costs, and reducing inequities in New Jersey.

Researchers concluded that the evaluation shows that this kind of home intervention offers great potential to reach more families enrolled in Medicaid.  HRiA and Rutgers Center for State Health Policy are also evaluating the cost effectiveness of the intervention, which could help New Jersey’s Medicaid program determine whether to invest in its expansion throughout the state.

Read the evaluation.
Share
Print
More In This Section